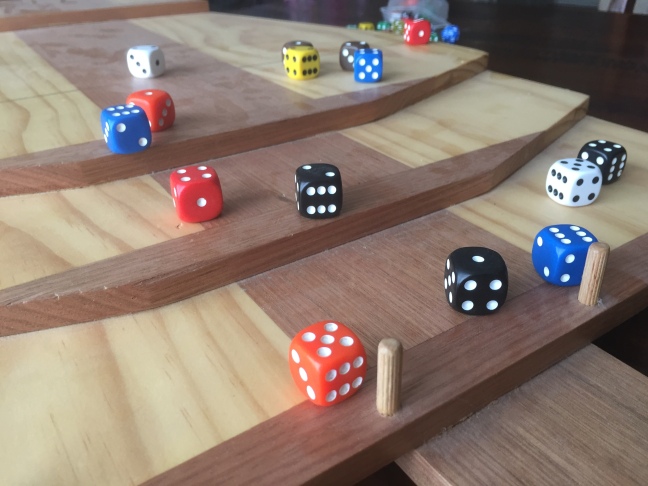 These are the adventures of ShepparCon’s most dextrous, their mission: to find who could control the rolling of a small plastic cube, to explore the frontiers of the board, to boldy stop before going where no dice has scored before.

Question: have you ever felt like you only needed an opportunity and that something amazing would follow?

At ShepparCon 2018 many people tried our Tumblin’ Dice board perhaps for the first time. The game has been published by various groups since 2004; Nash games, Alary Games, Ferti, and Eagle-Gryphon.

Players are required to take their dice and in turn, roll or toss or slide them down a cascading platform, attempting to have them go as far as possible without falling off. The further down the surface the die lands, the more that die is worth; when it stops it is worth the side facing up multiplied by the level the die stopped on. But beware! An opponents die (or your own in a future turn) could knock you out of contention.

So back to my question: The best thing about this game is the chance to roll a game changing score on almost every turn. Most rounds would net between 10 and 40 points, but a single ‘6’ on the lowest level is worth 24 (6×4) points. With a little opportunity an amazing score could follow.

During last year at ShepparCon around 30 players tried their hardest to roll the highest score and see if they could match it with the best in the final on Sunday.

My set is blinged out with an extra two die colours allowing for a total of 8 players. We also have a ten and twenty sided die per colour. These extended dice were used for the final where the 8 highest scorers played 4 rounds to determine the winner.
It was a final to remember. What we witnessed was classic Tumblin’ Dice action that came down to the last roll.

The eventual winner was leading after 2 rounds, but he was overtaken by challengers in the third round, he managed to pull victory from the jaws of defeat by rolling a high number on his D20 on the lowest level. Blowing the competition off the board!

This year we are setting out to recapture the excitement, you won’t want to miss out on the next chapter of ShepparCon’s Tumblin’ Dice comp.

Rules for this years event are: record your score from each individual round on the provided sheets; put that sheet in the entry box with a limit of one entry per person. Around Sunday lunchtime the finalists will be announced and the final should commence by 3pm.

Do yourself a favour and have go. Trust your intrepid dice to master the prime directive, go as far as possible, but not too far. Good luck!