ShepparCon 2018 is fast approaching, (only 2 months away!) so its about time we announced some of of what we have planed.

To help us out with this first announcement, we would like to welcome Ben Boersma of Darwin Games who will be returning to ShepparCon with his family to run An Eye for an Eye Tournament! The signup sheet can be found here.

Some of you may remember Ben, Shae and their son who attended ShepparCon 2017, and brought along An Eye for an Eye to the ProtoSPIEL event. They have since finished development and are currently running a Kickstarter campaign to help fund publishing.

Karl caught up with the creative minds behind Darwin Games to find out a bit more about the game and their creative process.

[Karl] Congratulations on launching the kickstarter for An Eye for an Eye! Can tell us a bit about the game?

[Ben] Thanks Karl! Eye for an Eye is an arena skirmish game and provides likely the closest feeling to actually fighting in an arena. Based in the Occulites setting, you are a Tribal Chief stepping into the Arena to represent your Tribe and defend their honour due to a dispute with other Tribes. Eye for an Eye is played in realtime. There are no turns, all players play at the same time. You roll and reroll your dice as often as you want. After each roll you either allocate some of the dice to action spaces in your play area, or reroll the dice. You can then call out any of those actions to move, attack, defend, heal, or use special abilities. The game play is fast and furious as you are constantly moving around the arena, ducking attacks and looking for possible openings. Each round is close to five minutes and is played to a thematic soundtrack. You can play a full tournament in about an hour, so it is extremely flexible.

[Karl] Wow sounds quite intense!  So What exactly is an Occulite? 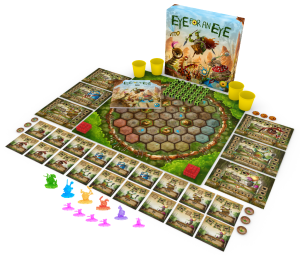 [Ben] An Occulite is a quirky creature that inhabits the world of Crepusculum. They generally have a rounded body, with short legs, thin arms and a long eyestalk coming out the top of the body. Their species are made up of many sub-species which have adapted to the environment of their particular habitat. So the Palaudis (swamp dwelling species) have got frog-like webbed feet, their body is covered in emu like feathers and the Chief’s often have reeds growing from the top of their eyestalks. They are an intelligent species that has evolved over time. Each sub-species has their own intricacies, specialties and weaknesses. The can be studied from our planet through ‘windows’, objects that have been struck by lightning in a particular way that the plasma burns a hole in space, letting us observe, but not interact with their world. The only known ‘windows’ were found by a young Australian boy in April 1982.

[Karl] This isn’t the first appearance of Occulites either is it.

[Ben] No, that’s right. Our quirky little Occulites have already featured in our first released game ‘Dawn – Rise of the Occulites’, which we co-published with Eagle/Gryphon Games. Dawn – Rise of the Occulites is a narrative, scenario based small skirmish game that sees you control a Tribe of five Occulites through a full Sungem Season. Allowing you to make decisions about what scenarios to tackle and your actions within these scenarios influencing the way your tribe evolves over time. It is powered by the Natural Selection Deck (multi-use cards).

[Karl] How did you come up with the idea for the game?

[Ben] The idea for the game came to us while we were mapping out how their society would evolve after The Drums of War (a huge series of mass battles that crippled the Occulite tribes and forced them into an uneasy peace). The natural progression was to have the Tribe Chiefs settle their disputes in an arena. It was originally designed as a turn based game where players had a pool of dice that they would expend to perform actions. This pool of dice represented their character’s stamina and as they used it, their options dwindled until they needed to rest. We loved the way it played, but one afternoon we were discussing it and were thinking how insane it would have been to actually have been fighting as a gladiator in an arena. Those split second decisions and pressure of staying alive while defeating your enemy driving your adrenaline. This thinking moved onto, well ours doesn’t feel anything like that… but it could. What if we made it realtime? And very quickly the game was redeveloped into something that much closer resembles what we have today. Influences for the game would be Escape: Curse of the Temple I suppose, but it was more the direct thought of how can we make it really feel like you’re fighting in an Arena.

[Karl] We were lucky enough to have you attend the ProtoSPIEL at ShepparCon2017, how long have you been working on An Eye for an Eye?

[Ben] We have been working on Eye for an Eye for just over five years now.

[Karl] And has it changed much over the development?

[Ben] Like we mentioned earlier, it changed pretty significantly early on in its development, but once we found our feet with what we wanted it to be, we have just been tweaking and streamlining the game into its current form. So besides its initial transformation, there hasn’t been any really big changes. More balance and accessibility changes than anything.

[Karl] Sounds like you have everything under control! So who is your favourite character?

[Karl] You are returning to ShepparCon 2018 to run an Eye for an Eye tournament, how will the tournament work (player count/time to play, rounds played etc)?

We run it as a round robin where players all play 5 rounds (each round usually with a different group of people). The scores are tallied from those games with the top 4 are grouped off into a final group and their points totals are reset to 0. This group plays 3 rounds, with their points across these three rounds being added up as per normal. The winner is the player with the most points after these three rounds. If there is a tie, the tied players play a final round to determine the winner.

[Karl] Sounds like something to look forward to! Any tips or tricks for those taking part in the tournament?

[Ben] Know your character, know your character and if you have time… get to know your character! 🙂
There is no time for reading the cards during each round, so be aware of what your moves do beforehand. Don’t panic. Remember to breath and slow down if you need to. A player that thinks with their head will win over a player that rolls dice faster. Take the time to look at the board state and what other players are doing. It will help you prepare for incoming special attacks, or indicate when is a good time to launch an attack. But most importantly, have fun! While it is a pretty intense competition, the game is designed to be fun above all else.

[Karl] Awesome 🙂 looks like I’ve got some reading ahead of me! Thanks for taking the time to chat and we look forward to seeing you at ShepparCon 2018!

That’s all we have today, remember to get your tickets if you haven’t already and look for more updates in the coming weeks!